No products in the shopping bag.

Gemstones of the Month: Sapphire and Kyanite

September 25, 2020
Birthstones, Gemstone of the Month 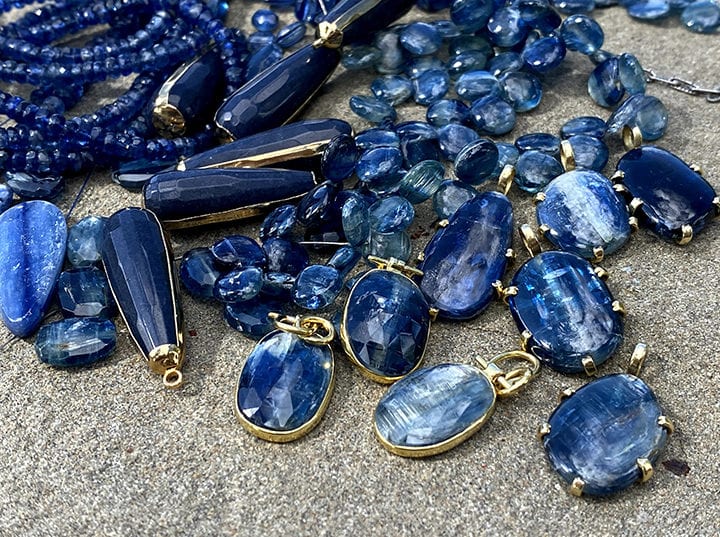 We can all use a little help, encouragement, and inspiration sometimes. Whatever you believe about the healing properties of gemstones, it’s undeniable: Jewelry empowers us. That’s the motivation behind our Gemstone Feature series. By sharing the stories of some of the gemstones gracing our latest Bloom pieces, we celebrate the countless ways jewelry brings positive energy to our lives.

This season’s Fall Heirloom Collection is dripping in hues of blue, including rare cuts of Sapphire and Kyanite. Sapphire is September’s birthstone and is in the precious gemstone family. Beyond being one of our designer’s favorite stones, Sapphire is believed to have a range of healing properties. It also has a uniquely royal and heavenly history.

Another favorite is Kyanite. This season, we are featuring Kyanite in an array of shapes and colors. From deep blues to dark teal, we are enchanted by this utterly unique stone.

What are the healing properties of Sapphire?

Sapphire healing properties are focused on mental discipline, peace of mind, and self-protection.

Sapphires are thought to stimulate the Throat Chakra, which is believed to be central to allowing you to not only feel but express your emotions and ideas. Sapphire is also believed to be a calming gemstone, helping to balance emotions and release unwanted thoughts. The idea is that it encourages mental focus and discipline, opening you up to wisdom while allowing you to freely understand and express your personal truth. In this way, Sapphires are thought to help wearers find peace of mind, as they learn to trust themselves and their paths.

Ultimately, the Sapphire healing properties of focusing and calming the mind are thought to bring wisdom, prosperity, and serenity to wearers.

What is the meaning of Sapphire?

Members of the clergy also wore Sapphires. To them, the blue Sapphire symbolized the blue heavens. Ancient Persians had already taken this idea a step further, believing that the earth sat on a giant Sapphire that made the sky blue. In this realm, the meaning of Sapphire was to symbolize the highest reaches of faith, insight, wise judgment, and protection from evil thoughts.

The most famous Sapphires in history reflect the royal tradition and meaning of Sapphire. King Solomon is said to have worn a Sapphire talisman. Helen of Troy is said to have owned a massive Sapphire. Napoleon gave his wife Josephine a jewelry collection dripping with Sapphires. In 1981, Prince Charles bestowed a blue Sapphire engagement ring on Lady Diana Spencer. The same ring was ultimately given by Diana’s son William to Kate Middleton, now the Duchess of Cambridge.

What are the healing properties of Kyanite?

The purported healing properties of Kyanite align almost perfectly with Sapphire healing properties. Thought to bring balance, calm, and harmony to the body and mind, Kyanite is known as a cleansing stone that clears out negativity. This is also why Kyanite healing properties are also said to include the ability to protect wearers from the negative energy of others.

Kyanite is also believed to help wearers break through fears or blockages. This is thought to make wearers able to more clearly and calmly communicate their ideas to others. It’s also said to inspire compassion for and loyalty to others, clearing out negative energy while bridging communication gaps.

What is the meaning of Kyanite?

The meaning of Kyanite begins with its linguistic origins. When Abraham Gottlieb Werner named the gemstone in 1789, he drew from the Greek word kyanos. Kyanos means “deep blue,” reflecting the gemstone’s most common hue. Kyanite also used to be called disthene, which is an ancient Greek word that meant two forces or two strengths. This is thought to be a reference to the fact that Kyanite has two cleavage directions of differing hardness: one perfect and the other one “good-uneven.”

With that in mind, the supposed meaning of Kyanite as a restorer of both internal balance and harmony, as well as of strengthened communication and friendship with others, makes sense. Kyanite’s reputedly strong, calming energy is thought to be helpful in both inward and outward directions.

Ultimately, the meaning of Kyanite has become a mix of compassion, communication, calm, and healing — both of oneself, and of one’s relationships with others.

Curious to check out Bloom’s Fall Capsule Collection pieces featuring Sapphire and Kyanite? We’ve got something for everyone. Here are three of our favorites.

Sign up for our newsletter and receive 15% off your first order plus the latest about our new releases, promotions and more.